Kuori Museum, the Finnish word for bark, gives its name to our proposal for the Sara Hilden Art Museum, the new cultural extension of the City of Tampere. The open and inclusive museum we propose takes shape in response to its urban and ecological context. Responding to the industrial heritage of the Finlayson area and the rich natural surroundings of the Wilhelm von Nottbeck park, the museum forms a permeable and living threshold between the city and nature, forming new connections and active public spaces that integrate nature and art. 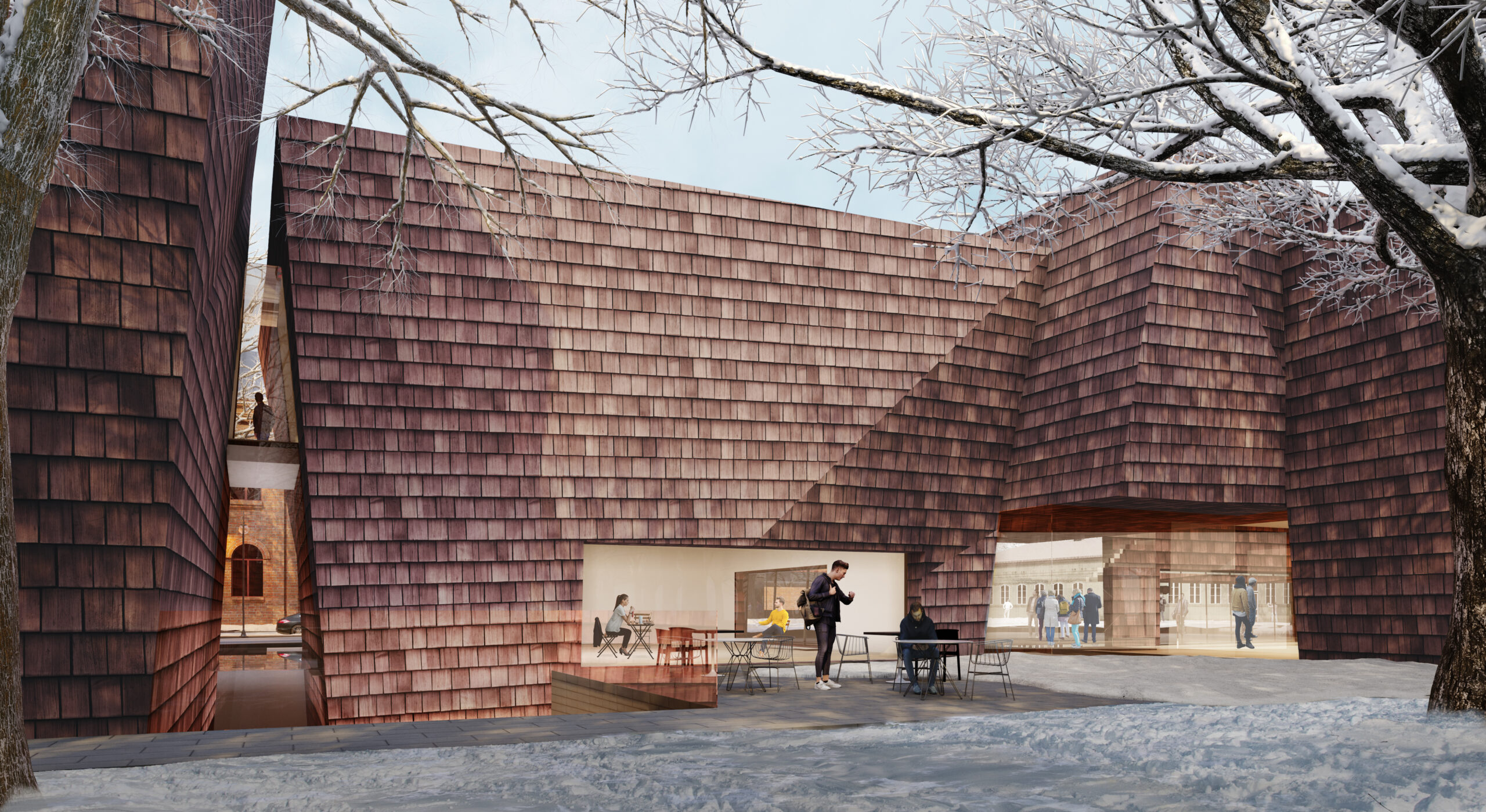 Light, Bark and Diffusion to the City

The museum reaches upwards to consume light into the galleries through rooftop canopies of north-lights, the gradual expansion of the volumes responding to the scale of the neighbouring buildings and the desire for light. The roofscape recalls the historic Finlayson factory roofs, reflecting the deep-rooted connection between light, craft and industry. 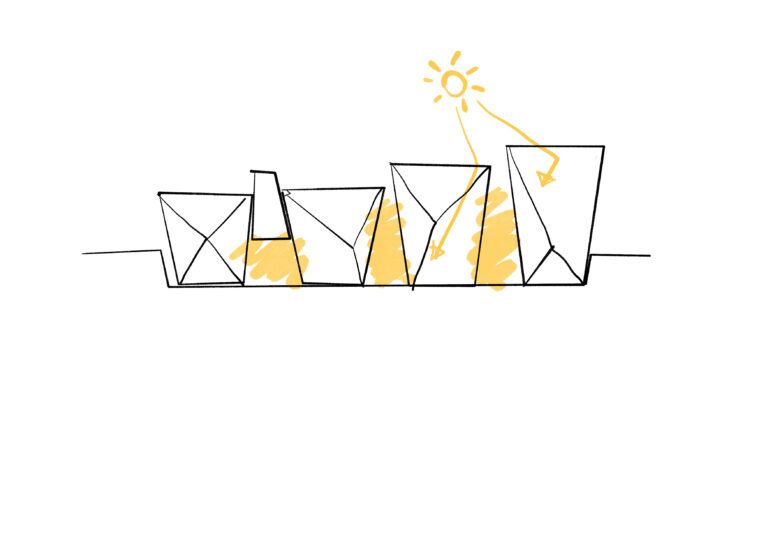 The new museum is conceived as a Bark that protects the collection, enables its growth, and catalyzes the public life in and around the art. Bark grows and gets rougher as the tree ages. Likewise, the museum will grow and flourish in its new habitat and in dialogue with its surroundings. 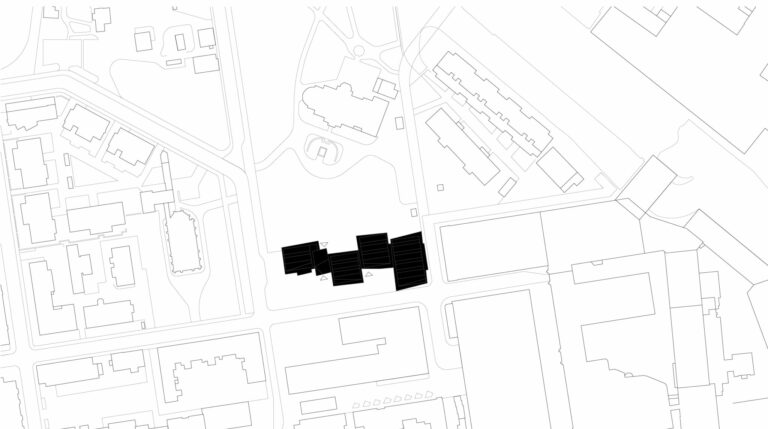 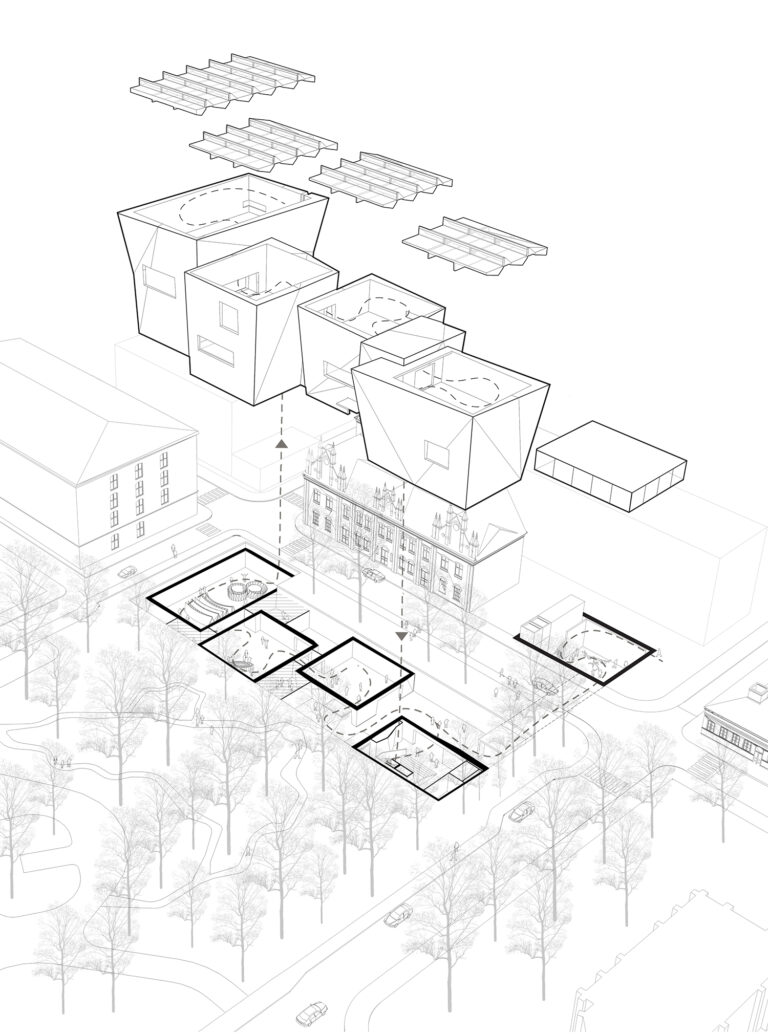 The museum is conceived as an open and permeable public space, an extension of the park as an urban sculpture garden. A proposed pedestrian axis following the natural route from Kuninkaankatu through to Palatsinraitin Silta forms the heart of the spatial sequence for the museum’s open ground floor, a diffused public space connecting inside and outside areas. The glazed passage creates a visual and physical connection to the park. The ground floor is an open public space where the non-gallery functions are positioned in close connection with the street and the park, with the possibility of flexible integration. The museum shop and public workshops are reachable from the street while the cafe and multipurpose hall face the park, which they can open out onto in summertime for outdoor events.

The timber shingle facade creates a subtle material dialogue between the reddish shingle cladding, the red brick of the industrial buildings and the natural texture of the tree bark in the park, extending the relationship between the urban and natural heritage context. The shingle facade, like the bark of the surrounding trees, wraps around the volumes forming a protective layer for the collection held within, the volumes mostly enclosed while opening up at particular moments to frame views to the trees. 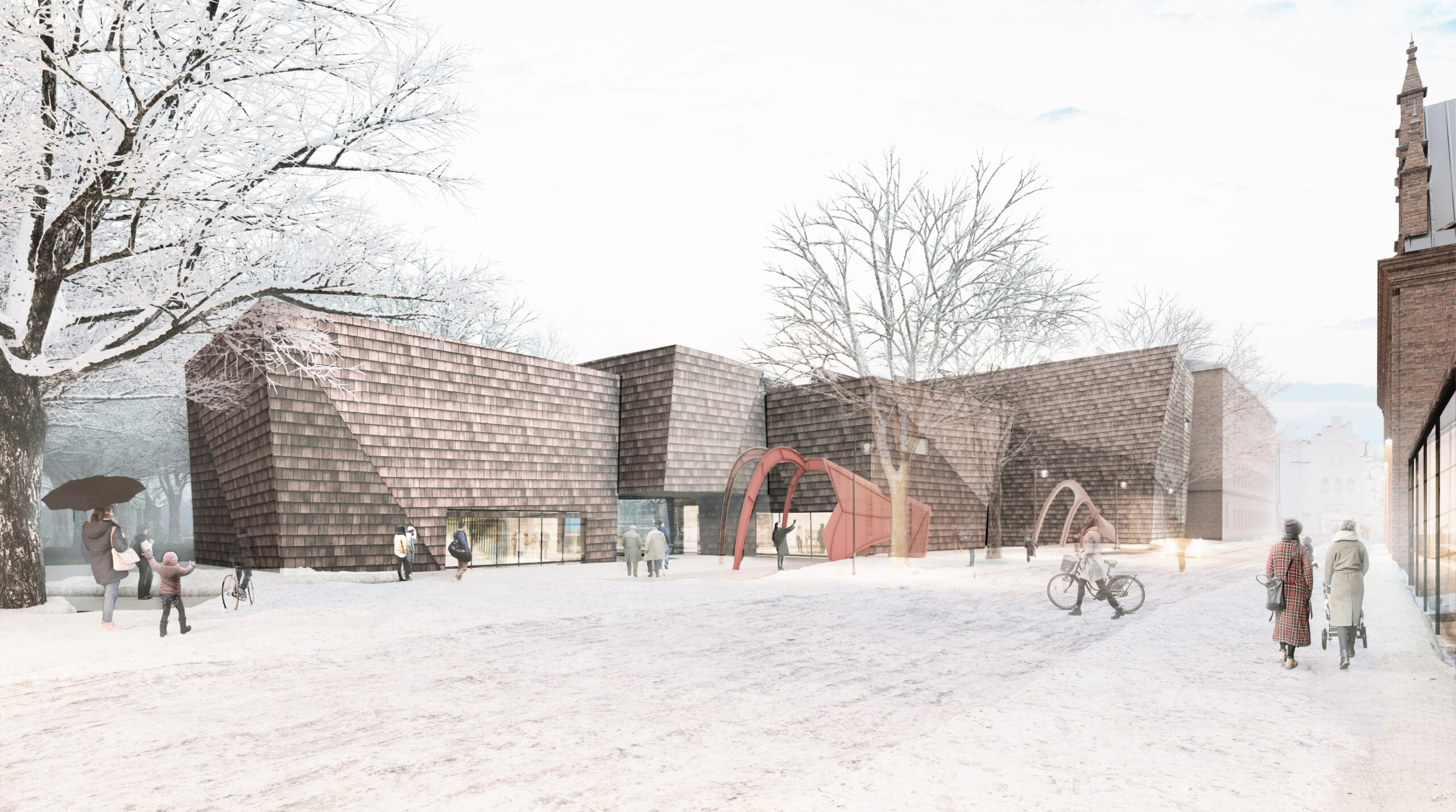 Timber is used throughout the building, with a composite structure using glulam beams and columns with modular CLT wall and floor panels, in addition to the treated pine shingle cladding and spruce interior finishes. Natural ventilation is proposed for the ground floor spaces during summer, while underfloor radiant heating in winter will maximise user comfort and minimise unnecessary heat loss from drafts. The upper gallery rooflights provide stable and diffuse northlight with tempered, reflected sunlight into the gallery spaces, with sensor-operated windows that can be used for passive ventilation in combination with the sensitively controlled mechanical systems. Rainwater and snowmelt collection from the roofs is transported down through the walls for grey water reuse within the building services. 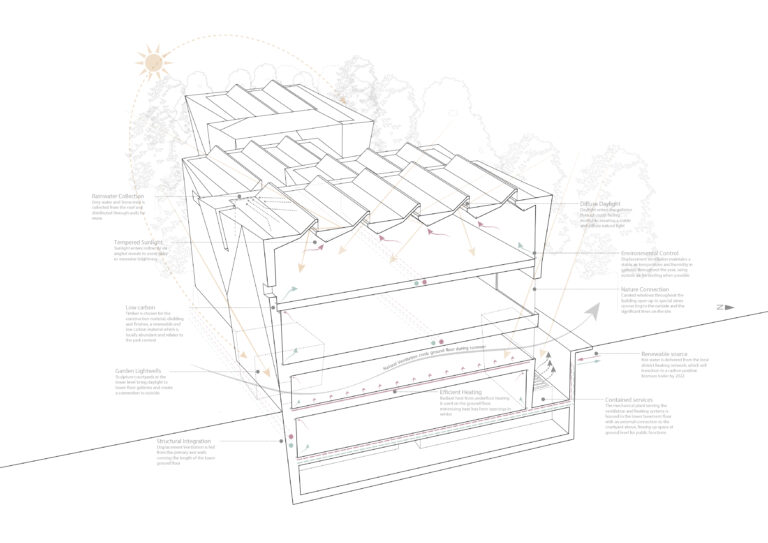 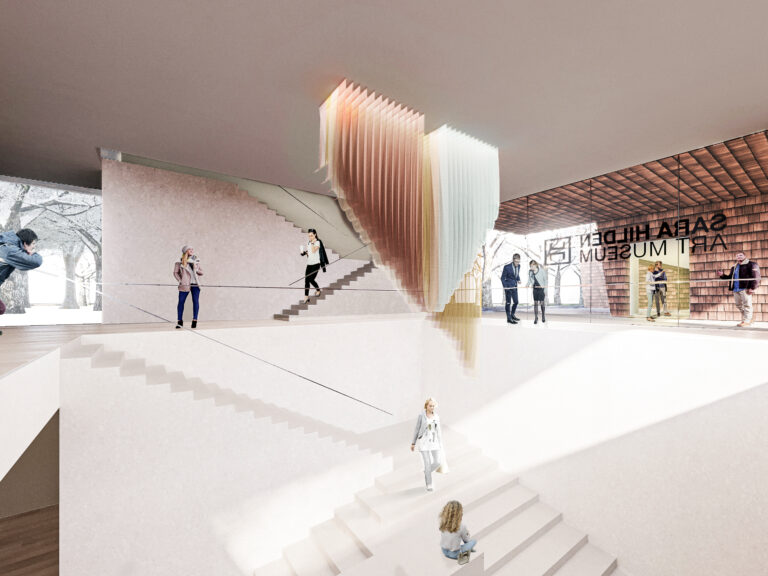 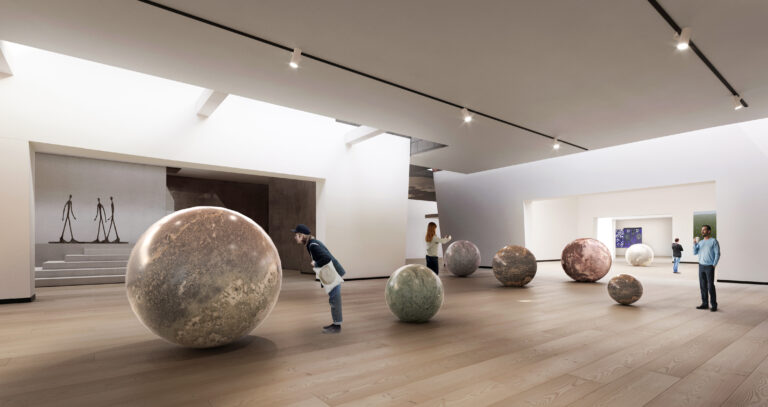 The spatial sequence of the museum is based on the concept of natural curiosity and a sense of discovery. Approaching from the corner of Finlaysoninkatu and Kuninkaankatu, visitors can peek inside the Katu Gallery, a hint of what they can discover inside. At the double-height atrium visitors gravitate towards the stairs that lead down to the lower galleries. Upon descending into the galleries visitors are drawn through the tunnel towards the Katu gallery where they can glimpse back up to the street. The circulation route develops a continuous loop with possibilities of surprise and intersection, interspersed by courtyards, resting niches, and openings to the park and the city. 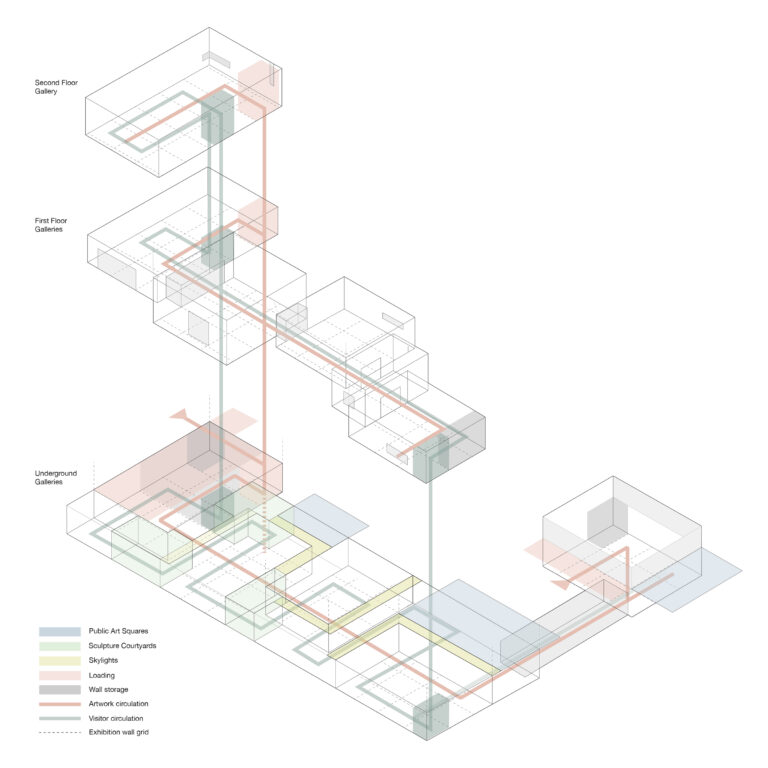 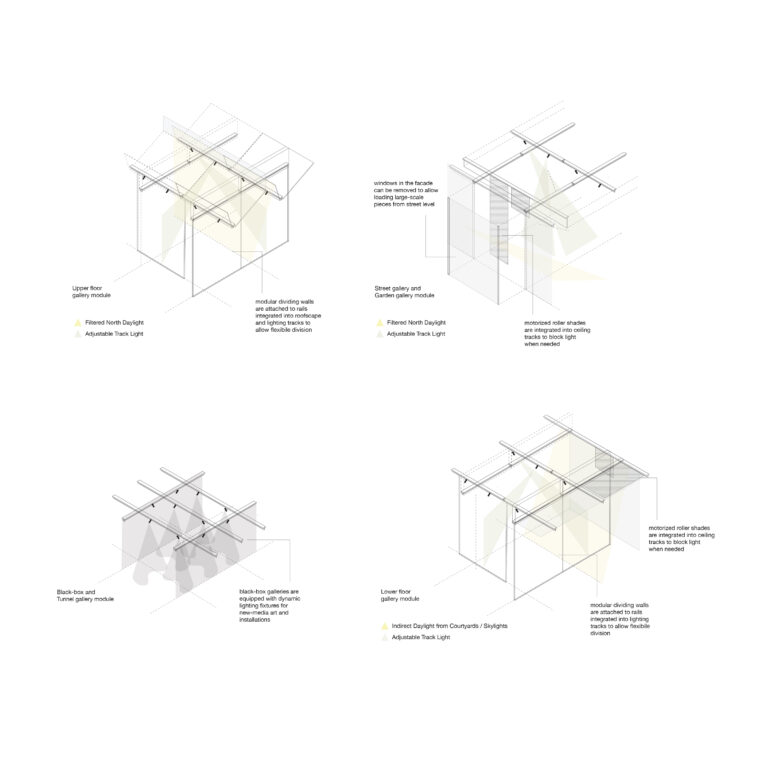 The proposal envisages galleries of all kinds with varying light conditions, contextual setting, height and scale, anticipating the vastly differing scales of contemporary art and seeking a greater diversity of works for the collection and temporary exhibitions going beyond traditional art mediums. 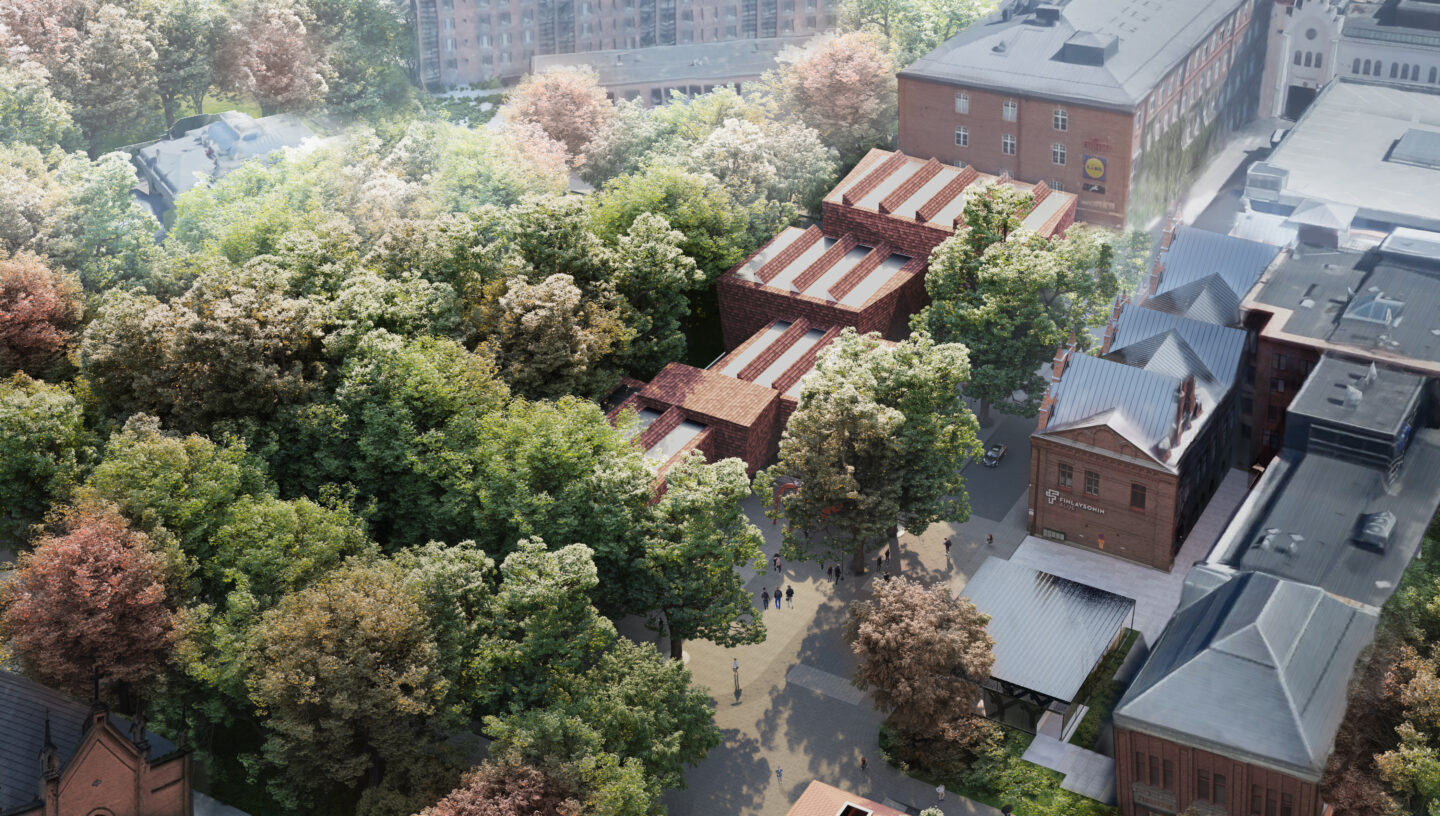 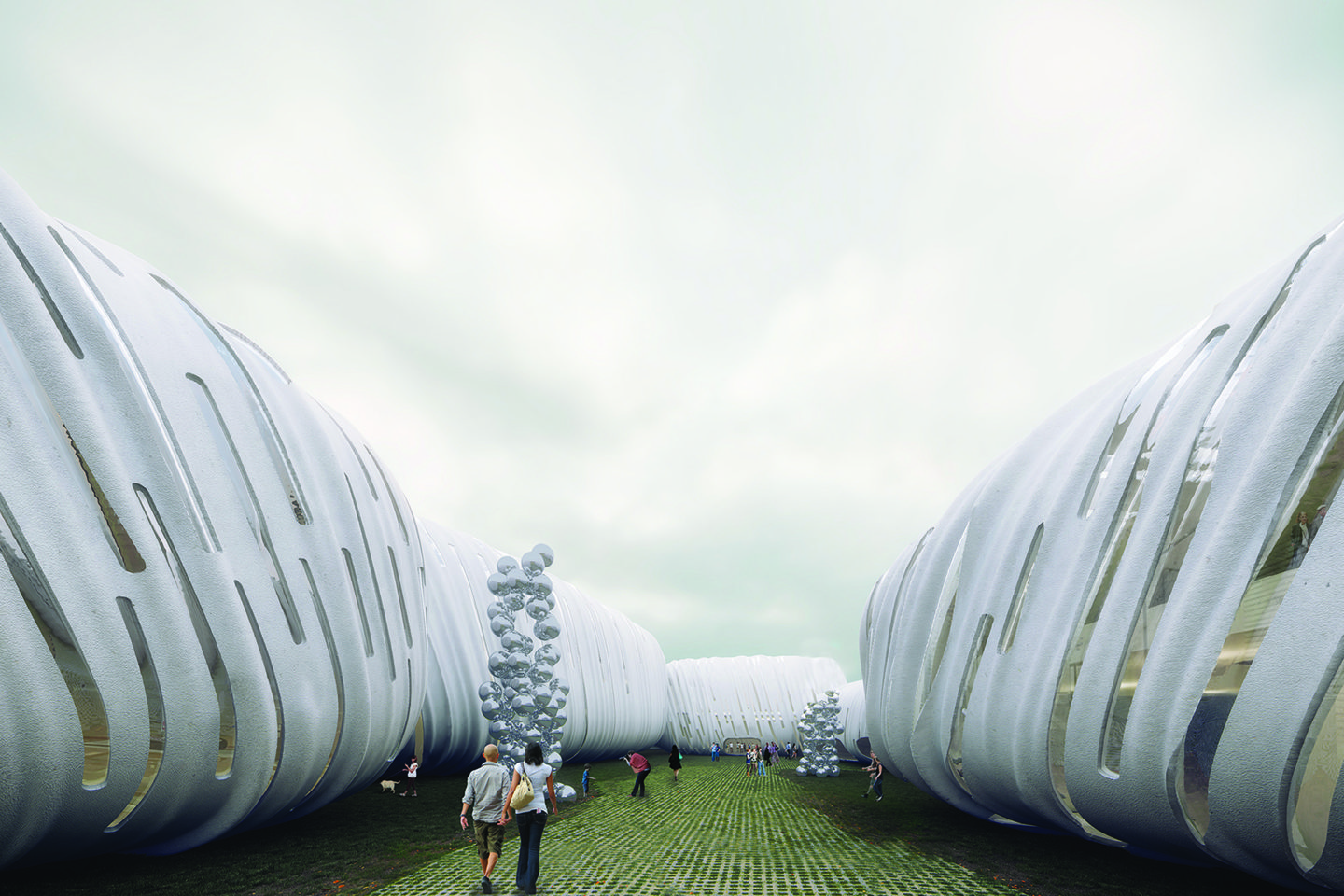 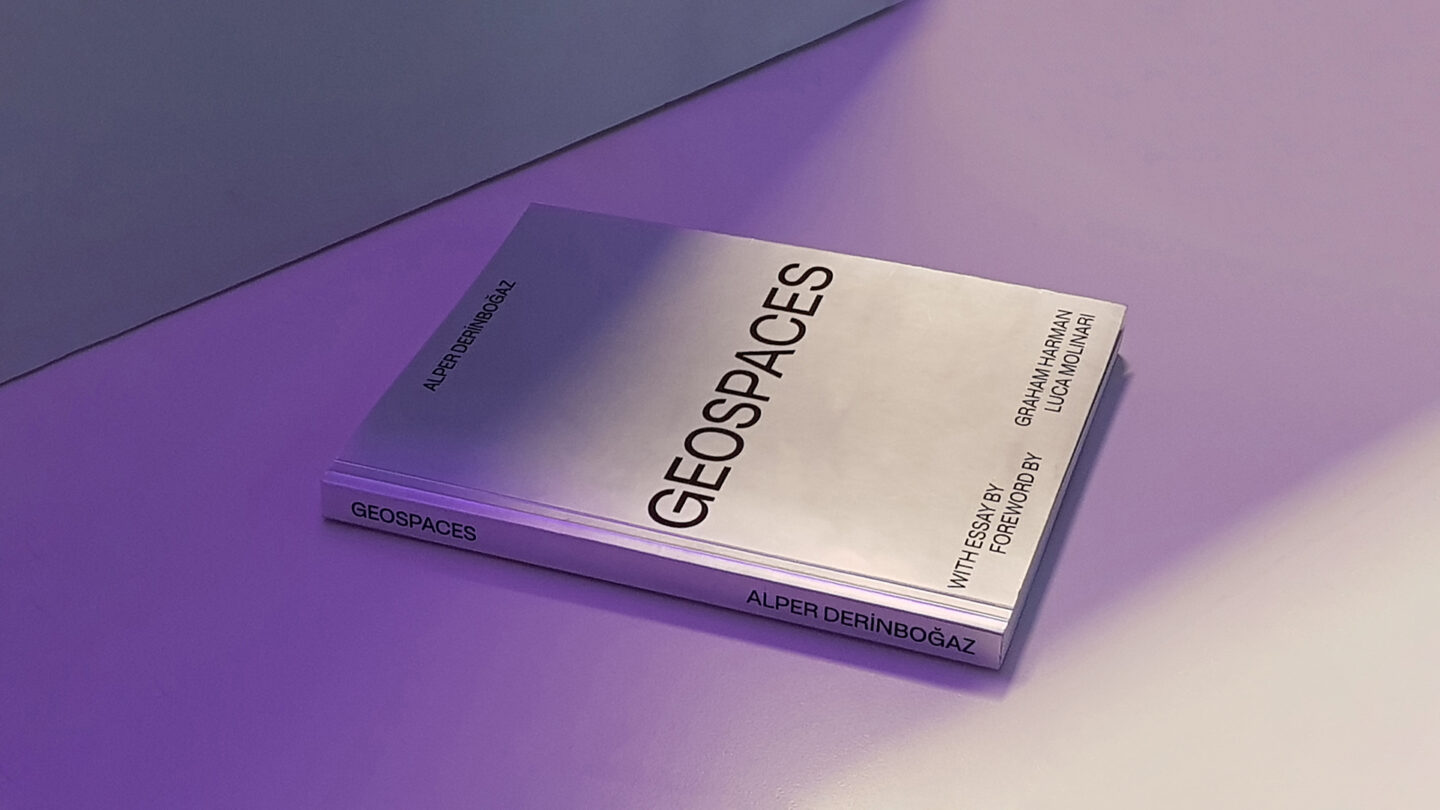 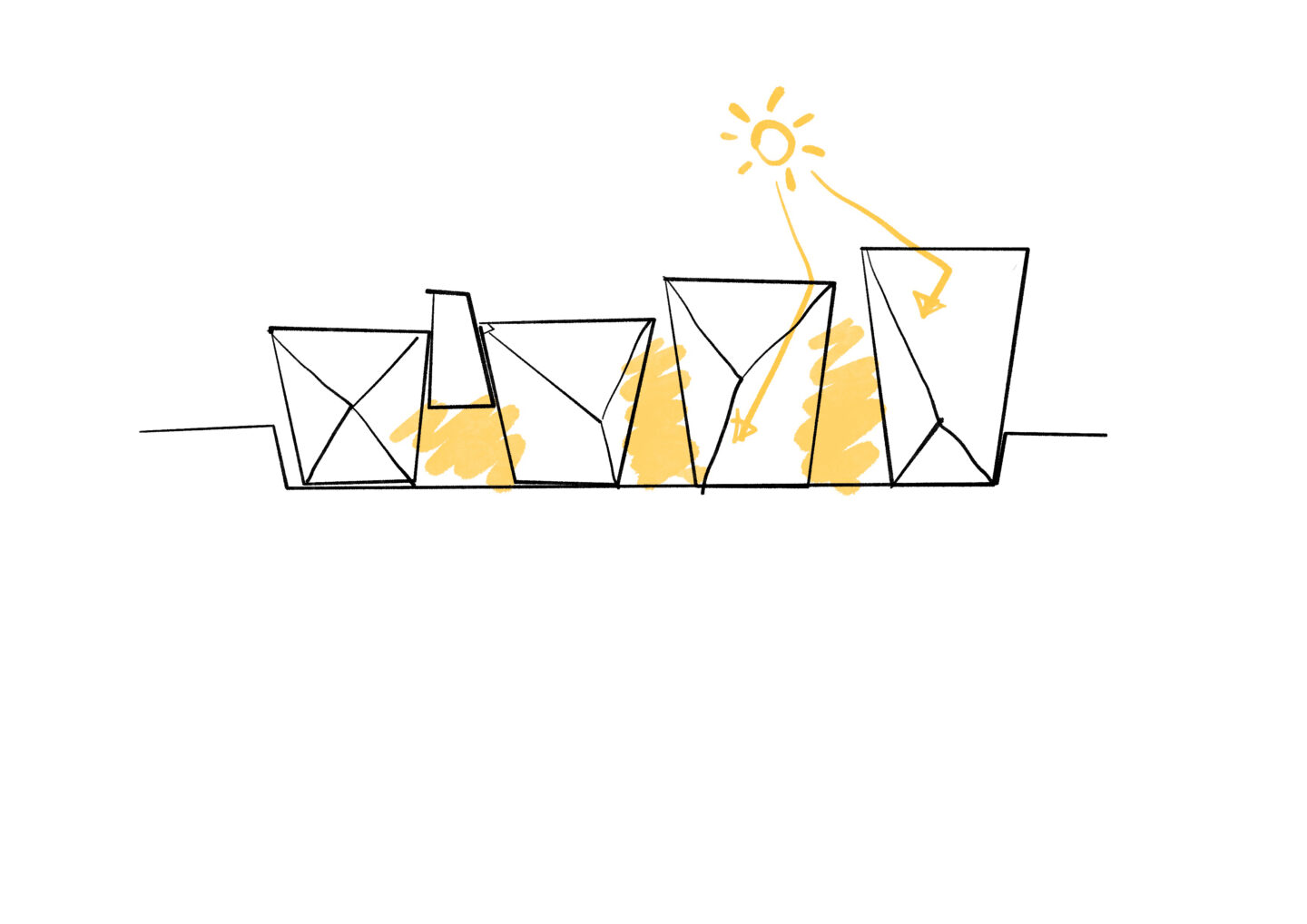 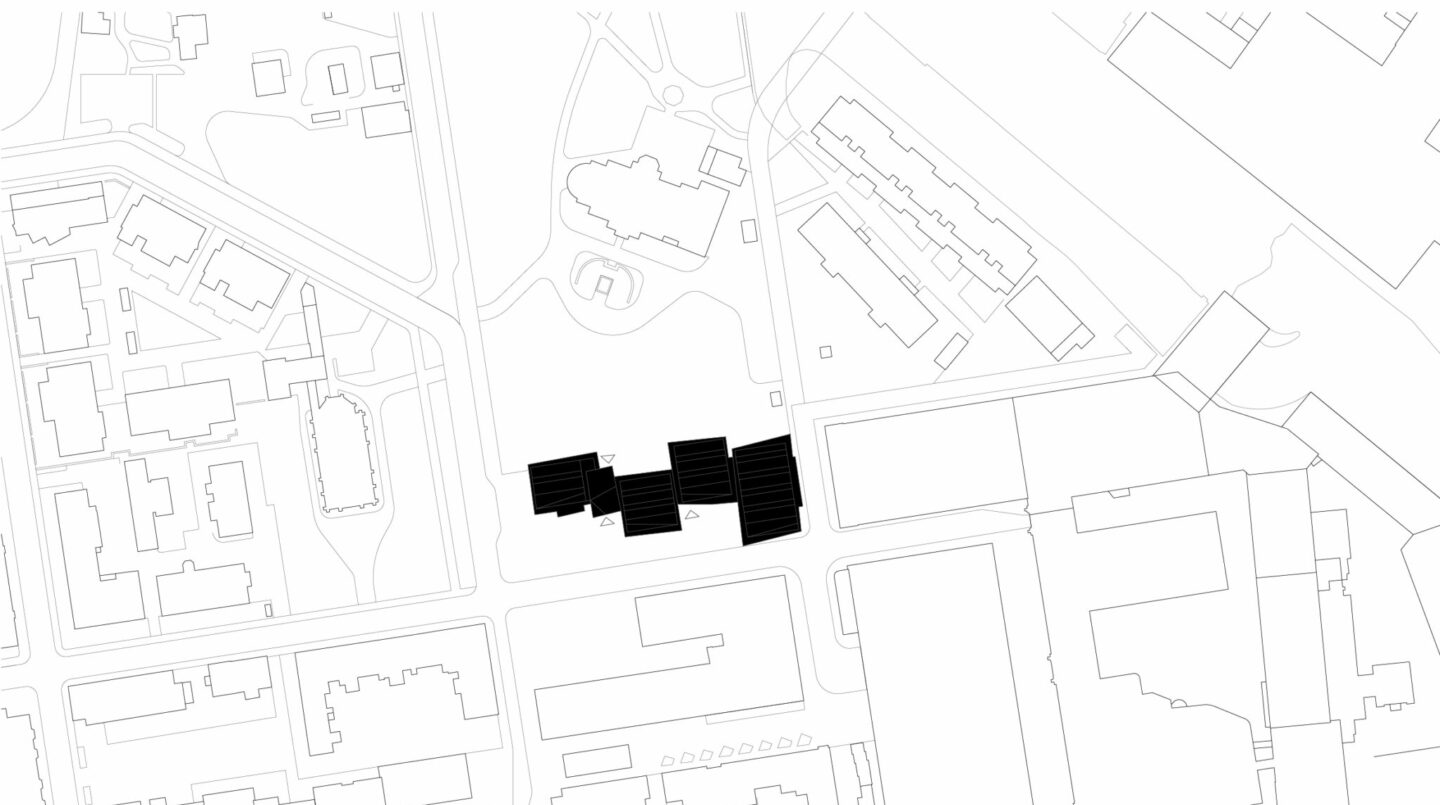 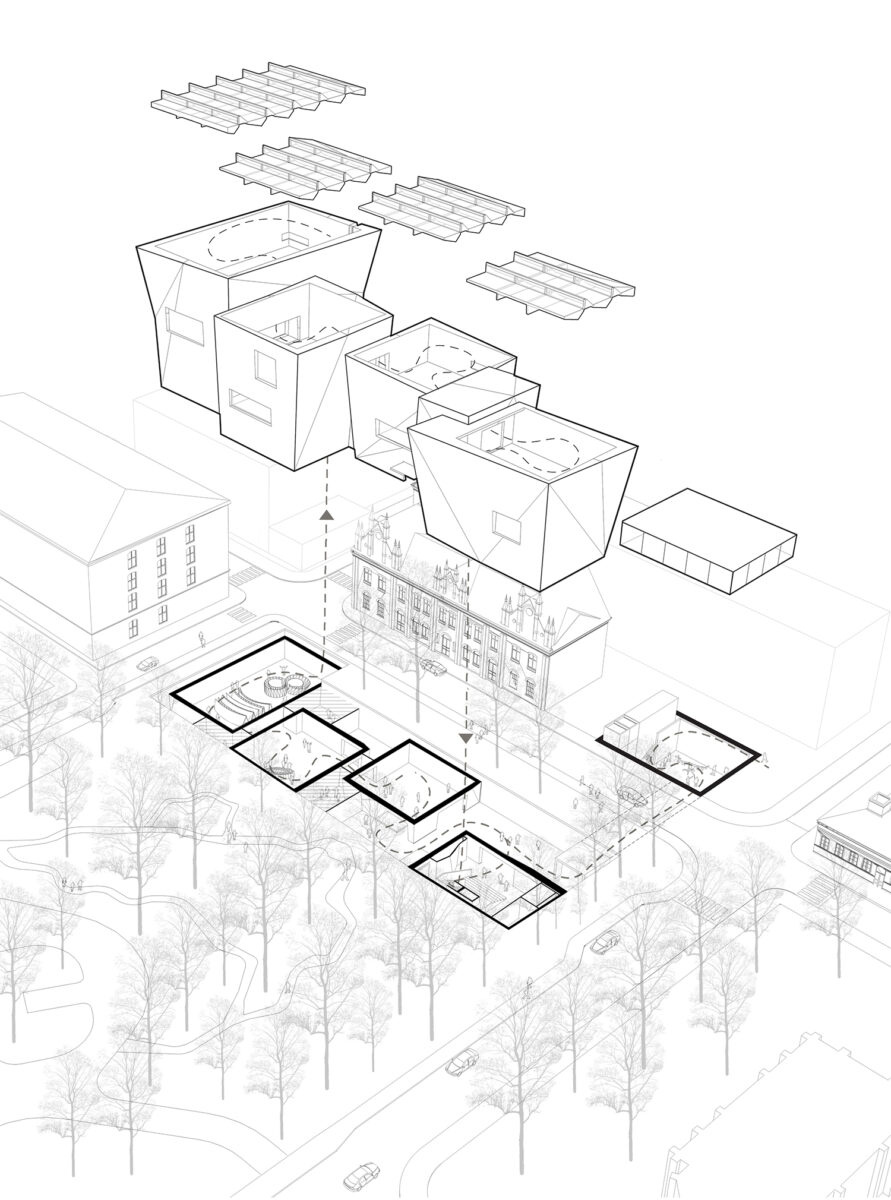 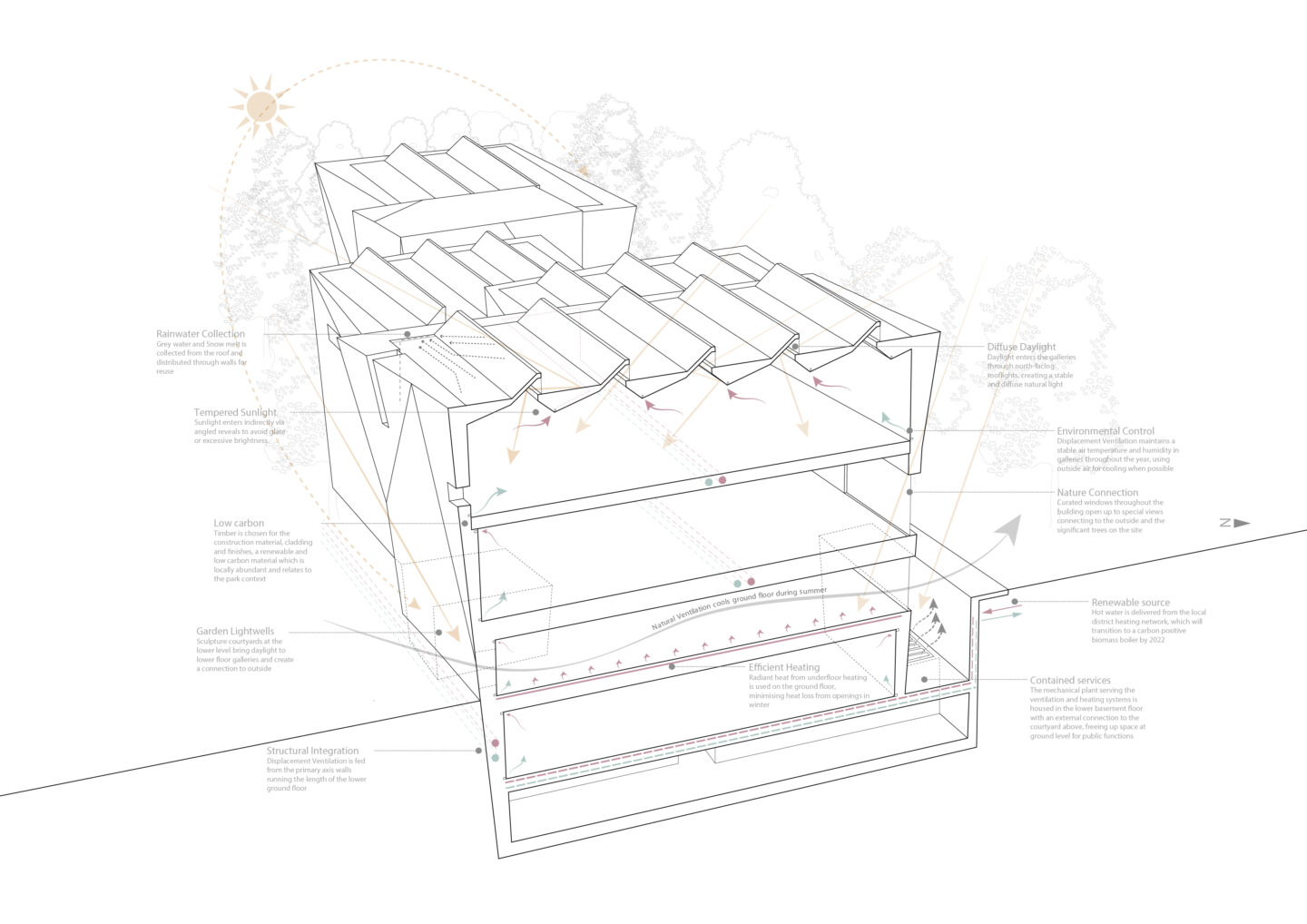 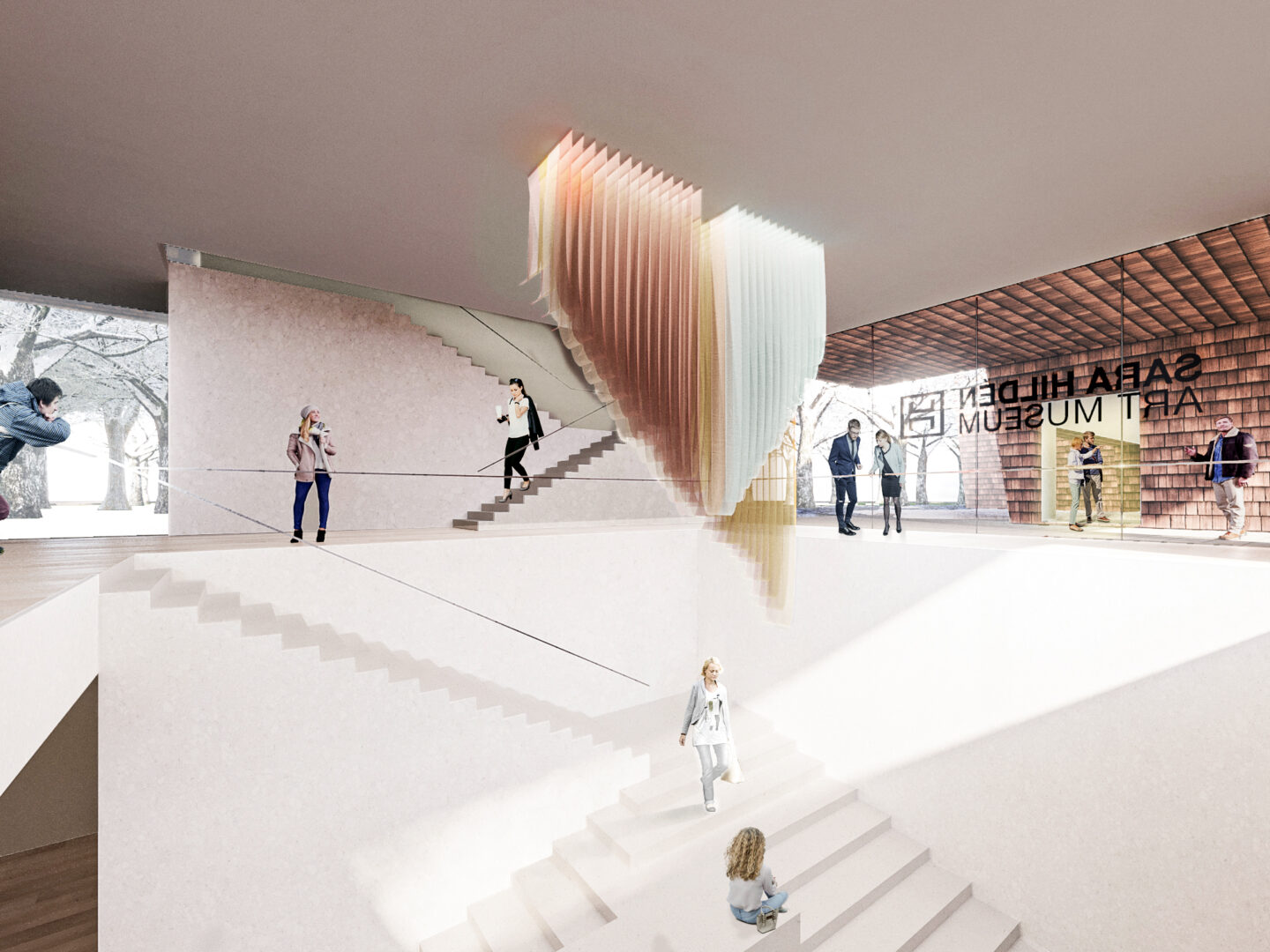 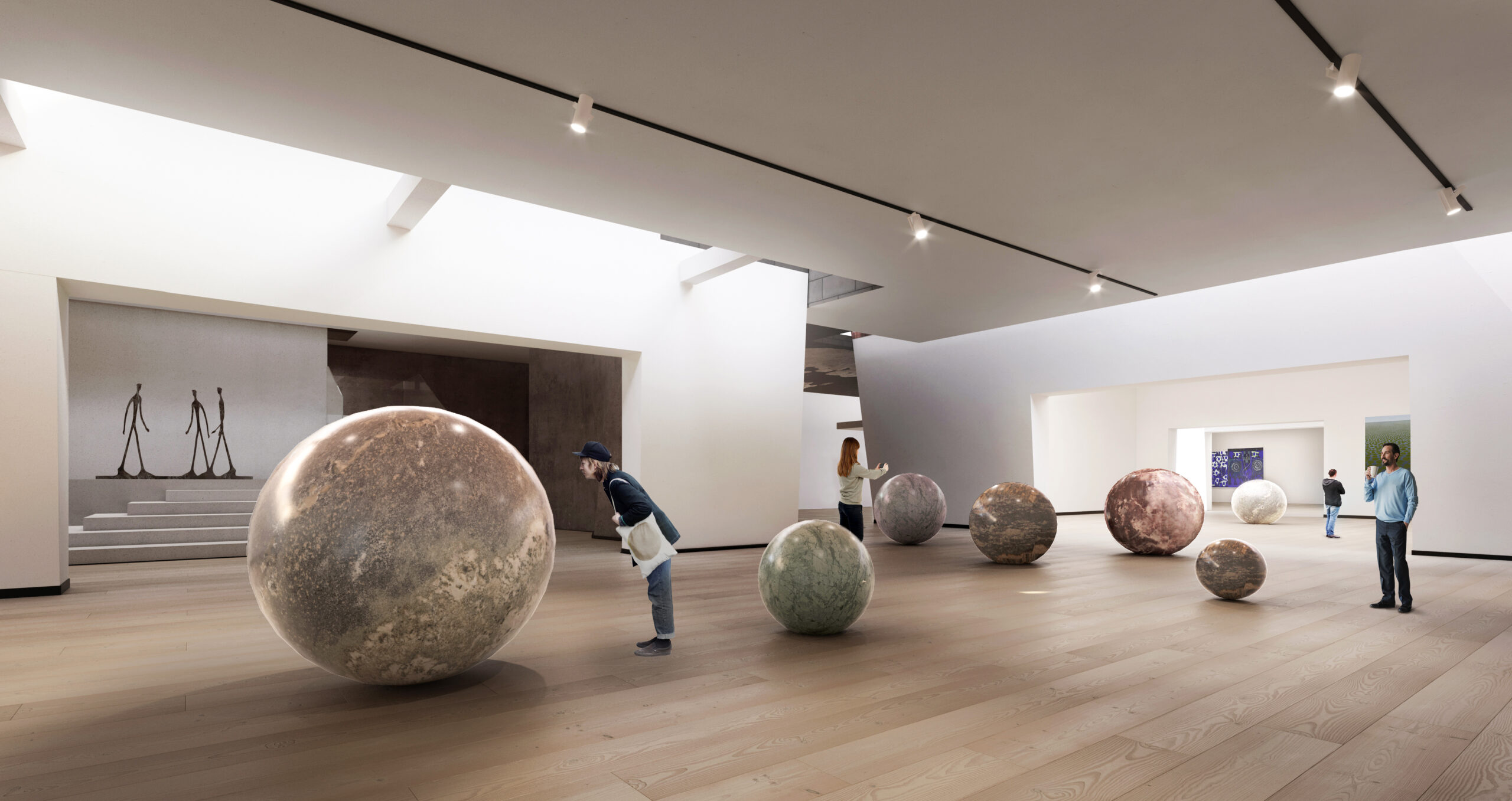 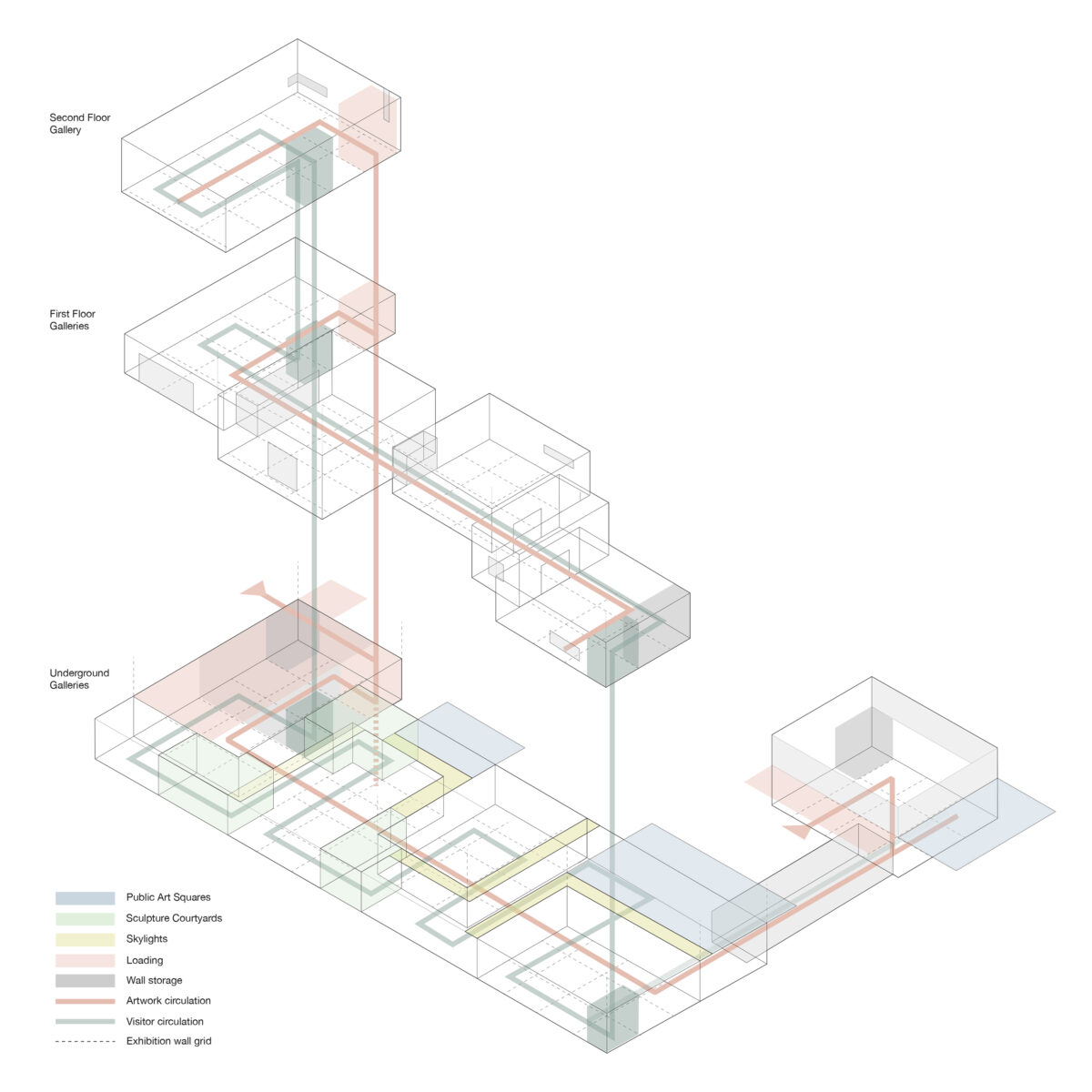 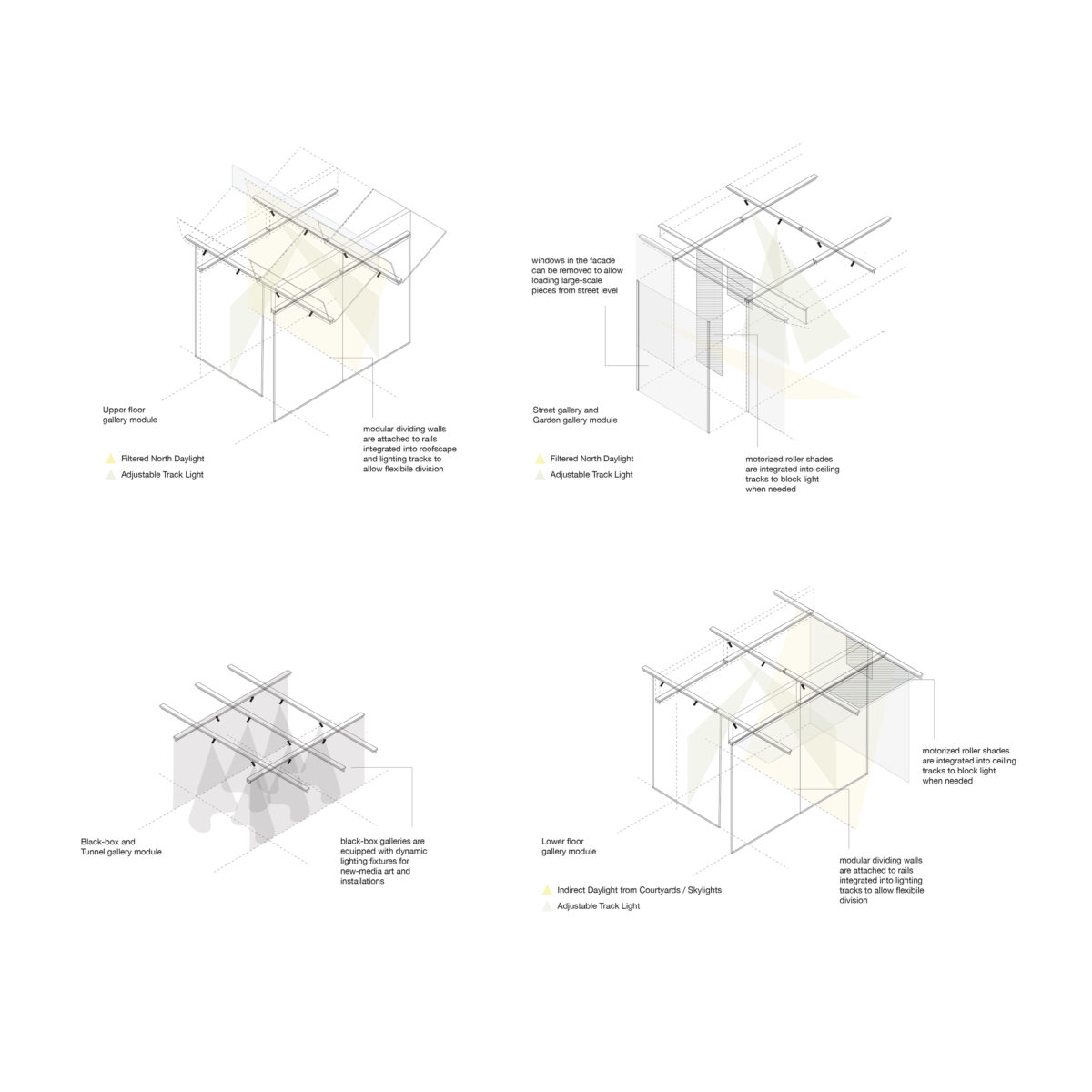